Way back in late 1981, when I was first working as a junior reporter on the Eastern Daily Press, Fenner Brockway came to Norwich to speak at an anti-nuclear meeting in (I think) the Theatre Royal.

Norwich has a fine radical tradition and at this stage had been a Labour stronghold for many years. But it was something of a left-wing island in the Tory sea of Norfolk – and the sympathies of the EDP and its senior staff were rural and conservative. 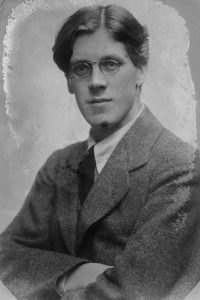 As the most junior member of the editorial team, I was despatched to report on the event.

Nuclear weaponry was a hot issue at the time, with the deployment of cruise missiles having been announced the previous year and massive Labour Party and CND rallies held in protest. But the decision to send me to cover the event suggested that this would not be front-page news.

As it turned out, I think I managed a few column inches some pages back in a less-than-prominent position. Unfortunately I no longer have the cutting and have no recollection of the meeting itself.

But I did get the opportunity to talk to Fenner Brockway afterwards. Then well into his 90s, he had been a lifelong peace activist in a political career stretching back to before the first world war.

A former editor of the Labour Leader, twice a Labour MP, founder of War on Want and the Campaign for Nuclear Disarmament, and leading light in the movement for colonial freedom, he was the living embodiment of the 20th century’s great left-wing causes.

Although I did not get the chance to spend any great length of time with him, I remember asking him about his time in the Independent Labour Party and getting one or two reminiscences in return.

This was vaguely relevant, even if it did not make the paper. Brockway had been a Labour MP from 1929 to 1931, when he lost his seat in that year’s calamitous general election. Shortly afterwards, the Independent Labour Party, of which Brockway was a prominent member, had disaffiliated from the Labour Party proper and began to stand candidates against it. Brockway was the ILP’s unsuccessful contender in a 1935 by-election in Norwich.

A quarter of century later, long after Fenner Brockway’s death, I took my young son to the Imperial War Museum. And there on display was a whole selection of material relating to Brockway’s role in opposing the first world war and setting up the No Conscription Fellowship in 1915.

I have to admit it was a strange experience to see someone I had once met remembered in a museum in relation to events which already seemed so long ago. My only regret is that in 1981 the selfie phenomenon was still so far in the future. It would have been nice to have had a picture.

There is a pretty good biography of Fenner Brockway (Lord Brockway) on Wikipedia.